The Gift of Sweeping Change 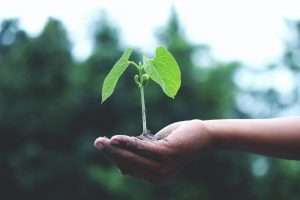 A year ago, I had the opportunity to visit my sister, who lives in Tanzania. During my visit, we went to Gombe National Park, where the famous Dr. Jane Goodall had conducted her research on chimpanzees.

At the park, we met a man named David, who leads a project with an organization founded by Jane Goodall called Roots and Shoots. Roots and Shoots empowers youth across the globe to make positive change in their communities, especially in the area of environmental conservation.

David works in Burundi, which up to 2005, endured a tragic civil war involving the use of child soldiers. David’s project involves bringing people together – people who had been from opposite sides in the war – to plant thousands of trees. They do this to rebuild the land decimated by the fighting, and to prevent erosion from destroying villages in the future. They are reconciling history by working towards a shared goal.

Amazing, right? But that’s not where it ends.

David told me that a few months before, they had experienced a big challenge. To transport and plant seedling trees, they used plastic bags. Plastic bags were foundational to the project because they were easy, efficient, and widely available.

But in June 2019, Tanzania banned plastic bags. Overnight, a major component of David’s project operation was eliminated. With their go-to option taken out of the picture, David and his team had to come up with another abundantly available, cheap way to plant seedlings. So they looked around them. And they saw bananas.

Bananas are everywhere in Tanzania, and banana leaves are large and sturdy. Using folded banana leaves, David and his team created a new kind of seedling planter- one that was better for the environment, and used an existing, renewable resource.

There are so many metaphors in this story. First, working together on something that benefits everyone can bring even the most divided people together. Let’s apply this to preventing child abuse. Even though 2020 has been a year of aggressive political divide, preventing child abuse has no party. It’s about all of us, and it takes all of us.

Second, sometimes big, unexpected change allows us to create something better. A plastic bag ban created a better alternative for everyone. What has 2020 caused us to toss, and what better alternative can we create? If this year has taught us anything, it is that sudden, prolonged change is hard, but human beings can adapt if we work together. We can look around and see what we have, and we can create solutions that we might never have tried if we hadn’t been called to change.

I’ll say it again: I believe in us. Let’s make some metaphorical banana planters and heal our divides by preventing child abuse, together.