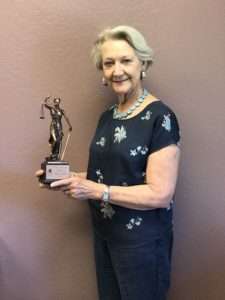 Each year, since 1998, the Arizona Bar Association Juvenile Law Section gives an award for excellence in the field of juvenile law. This year, Prevent Child Abuse Arizona Executive Director Becky Ruffner was recognized for her years of advocacy for Arizona’s infants and toddlers in the juvenile court system. Babies in Arizona enter the child welfare system because of maltreatment at four times the rate of all other ages of children, just at a time when the absence of safe, stable nurturing care is most damaging to their development. Once tangled in the child welfare system, infants remain in the child welfare system longer than older children, and are less likely to be successfully reunified with their parents.

To improve outcomes for thousands of young children whose health and development are at risk,  Becky co-founded Best for Babies, a training initiative in all fifteen counties which utilizes developmental science about the impact of trauma early in life, to bring best practices for supporting healthy development of maltreated infants to the courts and the child welfare system. Through this work, judicial oversight is strengthened through more frequent court hearings to assure each young child has the protection and support they need. Research has shown that the Best for Babies approach is correlated with reduced time in the child welfare system and increased rates of family reunification for very young children who might otherwise be lost in the child welfare system.

Becky has strengthened the vital advocacy role for infant and toddlers in the juvenile court by creating ‘Baby CASA’ training for community volunteers with the Arizona Supreme Court’s Court Appointed Special Advocate program. While thousands of CASA volunteers are serving as the ‘eyes and ears of the court’ for foster children of all ages in Arizona, the Baby CASA training brings new insights about the effects of early trauma to CASAs, helping them understand the behavior and emotional needs of children of all ages, whose early trauma may be effecting them as they mature.

Throughout her service to Arizona’s infants and toddlers, Becky has traveled far and wide through the state to share the Best for Babies approach. She has educated judges, court personnel, foster parents, and child welfare providers about the unique needs of maltreated infants and toddlers. She has also trained thousands of stakeholders about how to improve practice outside of the courtroom.

Retired Judge pro term Eileen Bond, who is also a former Terry Chandler Award recipient, commented that it is important to recognize a non-judge or attorney by the bar. Becky’s courage, tact, passion and skill honors the Arizona Bar Association’s core belief that those who are creative and innovative are needed to continue moving Arizona forward in providing justice to its residents.

Yuma County Judge Mark Reeves explained his experience with Becky, “When I was presiding judge of juvenile court in Yuma County, Becky was 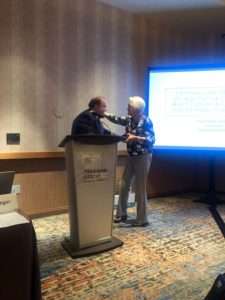 instrumental in assisting the courts, CASAs, attorneys, and all involved in the Juvenile Justice System in gaining a better understanding of the importance of infants and toddlers who do not have a voice in the system. Becky was able to provide a voice for the voiceless. We are proud of you, Becky. Your selfless commitment and dedication to making our children and families lives better is appreciated and will not be forgotten.”

In her comments upon accepting the award at the recent Arizona Bar Association conference, Becky credited now Chief Justice Robert Brutinel, as well as a former Terry Chandler Award recipient, for adopting Best for Babies practices in the juvenile court while he served as head of the Yavapai County Superior Court. “Justice Robert Brutinel’s willingness to allow a group of local advocates to suggest changes to how the court handled cases involving very young children is responsible for the success of our statewide initiative today. It has been tremendously rewarding to work with judicial officers and their stakeholders throughout the state, to improve the lives of the youngest children in their communities,” commented Becky.

Congratulations Becky, and all those who have contributed to support and strengthen her work to advocate for babies in the child welfare system.