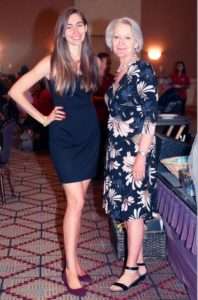 Since 1989, Prevent Child Abuse Arizona founder and executive director Becky Ruffner has led the organization with a fierce passion for ensuring all of Arizona’s children are raised in safe, stable, and nurturing homes. On December 31, 2019, Ruffner will retire, leaving the organization in the capable hands of a new executive director: After conducting a thorough nationwide search, the PCA Arizona Board of Directors identified Training Director Claire Louge as the best candidate.

Louge has worked with PCA Arizona for nearly 6 years, and says that Ruffner’s mentorship has been inspiring and invaluable.
“I am greatly looking forward to turning the leadership of Prevent Child Abuse Arizona over to Claire Louge,” Ruffner said. “Claire is a born leader, with a passion for using her gifts to improve the lives of others. Throughout her tenure at PCA Arizona, she has approached every challenge with confidence, clarity and creativity. Prevention is all about effective partnerships, and Claire will strengthen those we enjoy now while building new partnerships for the future.”

Hailing from upstate New York, Louge first came to Yavapai County as an AmeriCorps VISTA (Volunteer in Service to America). For a year, Louge served full-time at First Things First, where, on her first day, she would meet Ruffner at a Yavapai Regional Partnership Council meeting. Ruffner had an immediate impact on Louge, she recalls: “Becky held herself with grace and a formidable confidence. I thought to myself, ‘That’s the kind of leadership I want to emulate.”

For four years after her VISTA service, Louge continued working with First Things First as the Community Outreach Coordinator. Ruffner and Louge frequently crossed paths in their fervent efforts to support Arizona’s children. By 2014, Louge accepted a role as a Training and Outreach Manager for Prevent Child Abuse Arizona. By the time Louge was promoted to Training Director, she had a well-established reputation for building partnerships to best serve Arizona’s children and families.

Louge holds a bachelor’s degree in human development from Cornell University, and a master’s degree in human relations from Northern Arizona University. In 2019, she graduated from the American Express Leadership Academy at the Arizona State University Lodestar Center. Louge is certified by the National Alliance of Children’s Trust and Prevention Funds to teach the Strengthening Families™ Protective Factors Framework. She is also a Certified Trauma Support Specialist through the Arizona Trauma Institute, and is an authorized Stewards of Children® facilitator.

“Becky’s vision, determination, and courage have shaped the field of child welfare in Arizona,” Louge said. “It’s an honor of a lifetime to be chosen as her successor, and, along with our outstanding team, to have the opportunity to build on the foundation she has created.”