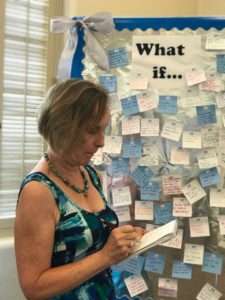 “Imagine a world without child maltreatment. Tell us how to get there by writing your own ‘What if’ statement.”

That invitation was extended recently to Statewide Child Abuse PREVENTION Conference attendees, who were encouraged to write their ideas on post-it notes and add them to the “What If” Wall, a giant bulletin board that was soon covered with inspiring insights about what changes or actions would reduce child neglect and maltreatment and strengthen families.

Arizona Republic Child Welfare reporter Mary Jo Pitzl wanted to hear directly from the professionals doing this important work, and attended the conference to discuss in depth the possibilities they imagine for child welfare in Arizona. These discussions will be featured in an Arizona Republic article about the conference, .

Pitzl, originally known for covering state politics, became the Republic’s full-time child welfare reporter in 2017. Pitzl said that it is a privilege to write about child welfare because it’s fundamental to all of us. With each article, she has the opportunity to make a difference and have a direct influence on her audience.

In the past two years of investigating this topic, Pitzl has found wide systemic problems in Arizona’s child welfare system that create unpredictable results for parents. “I’ve heard stories of both successful outcomes and crappy experiences of parents working with the system,” Pitzl said. “It all depends on multiple forces, such as the caseworker and judge assigned. You can’t just pin it on one agency.”

Pitzl also recognizes the community and societal issues that can contribute to child welfare problems, such as access to jobs, opportunities to hone skills, affordable housing, transportation, and affordable quality childcare. More perspective on the state of Arizona’s child welfare system will be explored when Pitzl’s documentary is released later this year.